I’ve never been a huge ice cream fan. Unlike my childhood friends, I rarely chased after the ice cream truck and unlike my college friends, I bailed on day 3 of our Roman gelato expedition (sorry!). Ice cream was nothing more than a molten chocolate cake compliment as far as I was concerned and didn’t hold a candle to Tiramisu.

If your feelings toward icecream sound similar to the above, Van Leeuwen just might change your mind. Launched in 2008 by New York entrepreneur and ice cream connoisseur Benjamin Van Leeuwen, these sunny lemon trucks deliver artisan ice cream to the masses. Van Leeuwen’s ice cream is made from organic, locally sourced ingredients including fresh cream, fresh milk, sugar and egg yolks. The manufacturing process abstains from preservatives and thickeners like condensed milk and corn syrup, emphasizing tradition rather than efficiency.

Another differentiating aspect of Van Leeuwen is its menu. Exceedingly simple, the 12 flavor offering represents seasonal ingredients and is neatly presented through hand painted herbs and spices. We chose a scoop each of Earl Grey Tea and Ginger – yum! The Earl Grey was delicate but complex and left a fantastic aftertaste of bergamot. The Ginger, in contrast, was unmistakably bold and masterfully combined the sharp tanginess of ginger tea with the sweetness of crystallized ginger.

I rarely get to the bottom of these giant ice cream cups, but the lightness and flavor of Van Leeuwen’s is hard to resist.  If you haven’t already, go check it out.  The trucks are usually parked in central NoHo, SoHo and the West Village and there’s usually one uptown near 60th and Madison; follow @VLAIC on Twitter for location updates. At $5.75 for a medium-sized biodegradable cup, Van Leeuwen’s doesn’t come cheap, but it is soo worth it 🙂 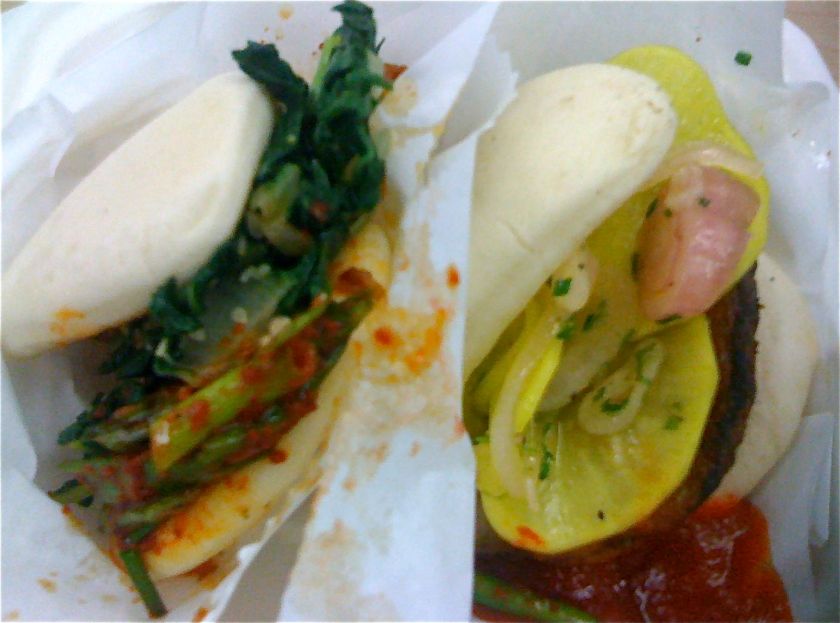 Food trucks are a hot topic. Their flourishing population has already led to some intense turf wars, a slew of food festivals celebrating their existence (check out the OC Foodie Fest in LA) and, even a concession by hard core Twitter critics that the service has at least helped bring gourmet food to the masses. Despite all this fuss, food carts are nothing new. The Vendy Awards, bestowed annually upon the winners of the street-food cookoff held on Governor’s Island, are in their sixth year. We’ve been standing in line for chicken & rice and buying bagels off the grub truck for decades in Manhattan. Then why the buzz? Did the 2008 recession blues cause lunchers to re-evaluate their $12 sandwiches? Is this the most cost-effective way for entrepreneurs to launch their foodie dreams? Did Twitter really change the game? Or did food carts just suddenly get really good?

Whatever the reason, I am a big fan. And it seems like San Francisco is too. Today, the company I work for rented Chairman Bao’s for lunch – meaning all of us got dibs on the captive truck parked behind our building. Wow. With a menu that includes things like Duck Confit with Mango Salsa and Lions Head Meatball with Kim Chee, you know they’re not messing around. I tried the Red Sesame Chicken with Scallion and Bok Choy and the Pork Belly with Daikon – both steamed, not baked – fluffy, spicy and delicious.  I also tried their Ginger Lychee shaved ice drink, which was very sweet but still irresistible.

Oh and check out the controversy around the truck – Eddie Huang, of Baohaus fame, claims they stole the idea for the name from one of his signature dishes.  I haven’t been to Baohaus but I think, if anything, the SF truck is drumming up West Coast fame for this LES store 🙂