After recommendations from several friends, last weekend we finally checked out Bondi Farmers Market… and immediately regretted not having come sooner!  Down on the south end of Campbell Parade, next to the public school, the market has food and organic produce every Saturday morning till 1pm.  We were more in search of groceries than snacks when we arrived, but ended up partaking in many of the below.  This is as good as (possibly even better?) than the San Francisco Ferry Building Farmers’ Market, which is saying a lot 😉

Lovely mural at the entrance

Fun mats at the entrance 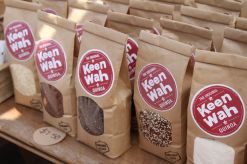 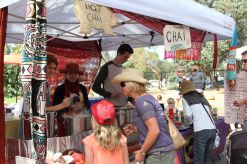 The chai tent was a hit

We had an amazing lychee-rose dessert from here 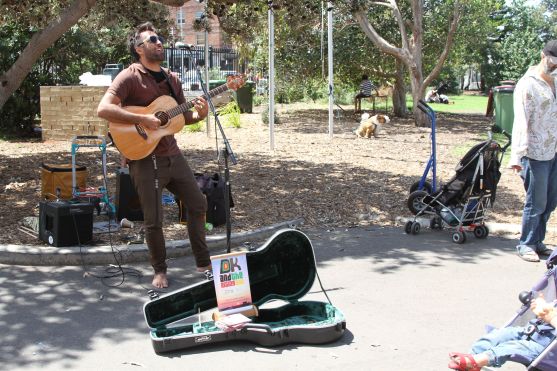 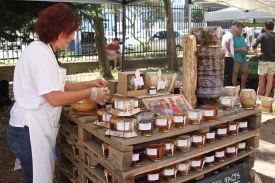 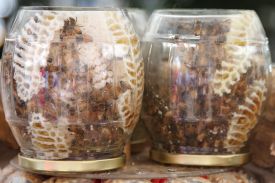 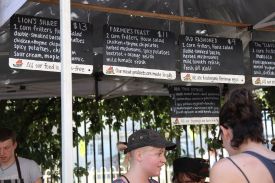 Best food in the market: the fritter house 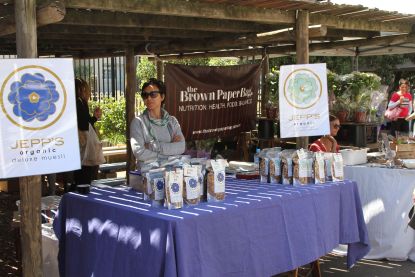 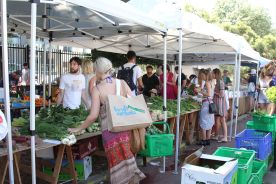 This was possibly the best bun I’ve ever had

Melt in your mouth pork bun 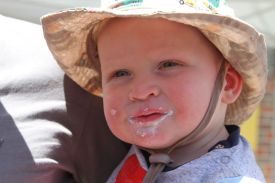 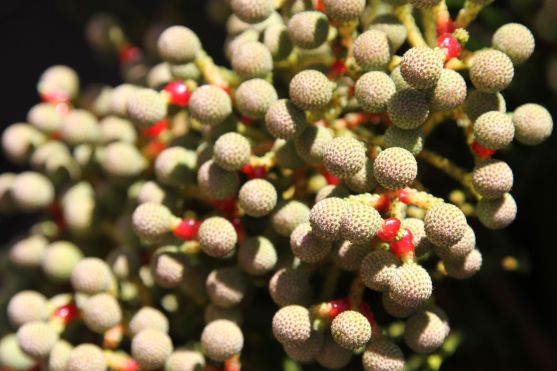 I don’t know what these are called 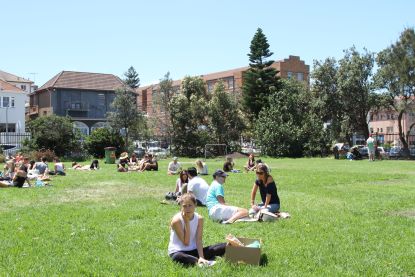 Picnicking in the grass 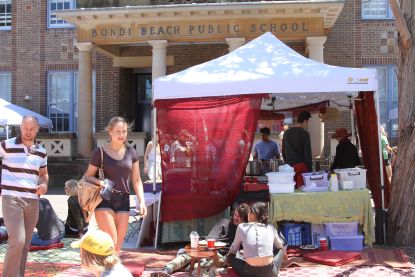 Chattai mats around the chai stall

It’s been a while, I know.  But I promise I’ve been really really busy.  For example, two weeks ago I was in England, hopping between London, Cambridge and Leeds as I re-connected with some of my all-time favorite foods.  After 30 painful months of separation, I am in love, all over again, with British food.

Now, I know what you’re going to say and I’ve heard it all before: British food is terrible, bland, over-cooked, stodgy stuff that no one should have to eat.  But you’re wrong and here’s why:

Yes, fry-ups are bad for you, but that’s not what I’m talking about.  I’m talking about variety.  As much as I love bagels, cream cheese, capers and lox and even though I’ll admit to sneaking eggs on a roll with Tabasco from my local street cart every so often, New York’s breakfast options are surprisingly limited beyond that.  And no, I don’t really consider Dunkin Donuts or Krispy Kreme to be purveyors of real breakfast food.

For starters, there’s EAT.  Yes, they’re a chain but they’re also dedicated to fresh, quality food.  EAT serves a delicious selection of toasted breakfast sandwiches, muesli, granola, yoghurts and fruit salads.  EAT doesn’t buy a single mass-produced sandwich, soup or salad – they make everything fresh in their own kitchen with a one day shelf life. 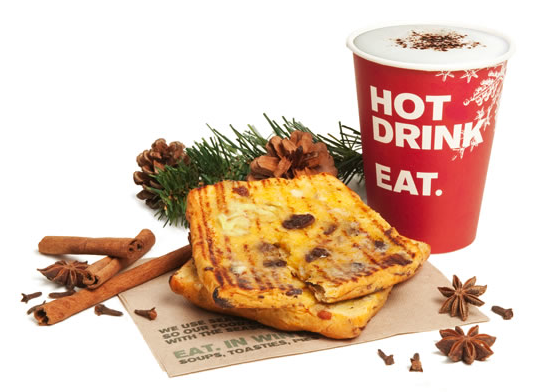 High on their heels is Pret A Manger which, like EAT, prepares its food fresh every day (each store has a kitchen), abstains from any “factory stuff” and changes its menu regularly to incorporate seasonal ingredients.  Pret started in 1986 as a London venture by college friends Julian and Sinclair; today the company has 240 stores.  They’ve  always been a socially conscious business, giving leftover food to charities, but this year Pret launched the “Really Big Christmas Dinner“, whereby they will donate 5p from every sandwich sale through Nov and Dec to hot Christmas meals for the homeless.  While I personally prefer the breakfast food at EAT, Pret has been more successful / aggressive about growing the business.  Besides offering a wider variety of products, they have grown their presence in several American cities as well as parts of Asia.

There’s also Apostrophe, a modern London take on the boulangerie-patisserie, and Innocent Drinks, a fantastic company that makes delicious smoothies and breakfast thickies with 100% pure and fresh fruit.

So yeah, British breakfasts are awesome and worth missing.  Bircher Muesli (Jamie Oliver recipe here), REAL bacon, sausage rolls, fresh yoghurt pots (none of that giant, mass-produced, sugary parfait stuff) and yes, a “Full English” are all hard to come by in the States.

First is the issue of height.  I am well acquainted with the bigger is better way of American life, but there is really just nothing pleasant about 3″ of bland meats and salads packed inside 2″ of bland bread, held together by what looks like a toothpick.

No one can fit a real American sandwich in their mouth… and even if you somehow manage it, you’ll probably end up eating an entire piece of meat or a bland tomato slice because the fillings aren’t chopped up.  Throwing together a bunch of coarsely chopped ingredients with some mustard and ketchup does not a sandwich make.

Second, is the issue of cheese.  The average American sandwich contains American cheese, a processed cocktail of emulsifiers, preservatives and colorings engineered to melt obediently at the slightest application of heat.

Finally, there’s the issue of the bread.  I don’t know why but whether you order a sandwich at your local deli, restaurant or cafeteria or buy the bread at a supermarket, American bread just doesn’t taste as good.

In contrast, the average Britain sandwich offers you Crayfish and Rocket (yes, instead of watery iceberg lettuce), Cheddar and Branston Pickle, Egg & Cress…multigrain, wholegrain, German rye… the options are endless. 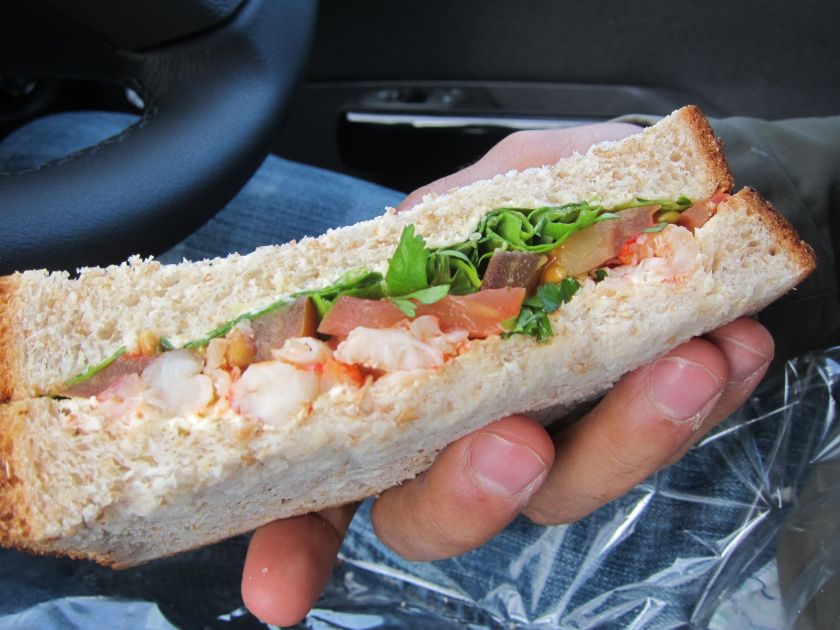 As much as I respect America’s penchant for pie-baking, England definitely wins when it comes to the sweet stuff.  Maybe it’s proximity to chocolate-loving Belgium and dessert-loving France, maybe it’s a history of cakes and trifles, no matter how you slice it, the Brits come out ahead.  England has chocolate digestive biscuits and Cadbury’s. ’nuff said.  Oreos and Hershey’s taste like cardboard in comparison.

If you’ve ever visited Borough Market, you’ll know that it puts even the San Francisco Farmers’ Market to shame (which, for the record, is fantastic). Hundreds of small artisans, wholesalers, foodies and retailers flock to this bustling space each Saturday to partake in the exchange of local ‘honest’ food.  Wander past the cafes and al fresco restaurants to take in the colourful displays of fresh fruit and exotic vegetables.  Nibble on stilton and shropshire and sample the pungent patés and spicy curries.  Recharge at the fresh juice station and sip on mulled wine and hot cider at the beverage corner.  If you feel up to it, stand in line for a serving of rich, gooey raclette or for a freshly grilled burger.  Munch on your meringue, pick up some elderflower jelly and make sure you pack some Turkish delights for later.

I hate using the term ‘ethnic foods’ so I’m going to boil this down to the crux of the argument: England is really good at sussing out the “best” [insert cuisine type] dish and selling it en masse.  Rather than view this as an adulteration or departure from authenticity, I consider this a warm embrace of “foreign” culture by a hungry British public.  I love that Chicken Tikka Masala, or CTM as it is affectionately known, is India’s national dish, but only in England.  I love that people go bananas over an £9 chicken wrap at Nandos and I love that I can buy taramasalata in pretty much any grocery store.  England’s physical and psychological proximity to Continental Europe, Asia and Northen Africa uniquely positions it for access to a variety of rich culinary traditions. Joking aside, Indian food (as an example) has progressed well beyond the ubiquitous CTM and made its way into the vernacular and essence of British life.  It’s pretty easy to walk into one of Masala Zone’s many London outposts and walk out 20 minutes later with a happy tummy full of lamb roganjosh.  The same applies to the mind-blowing Lebanese food at Maroush, which you will likely encounter 11 times while walking down Edgeware Road.

I could go on for a while in defense of what has come to represent British food, but I’ll stop here.  My point is certainly not (entirely) to rail on American food since I’m a big fan obviously, but to point out just a few of the highlights of food in England which is by no means inferior to food in America.  If you’re still hesitant to skip the pond and see for yourself, I’d encourage you to try some classic British dishes like shepherd’s pie and Welsh rarebit or indulge in some cream tea, a Sunday roast or even just some fish and chips. Until then, enjoy the pics!

Full Disclosure: I got engaged in London this past weekend and it is therefore entirely possible that I am writing this post on a (British food?) high 🙂 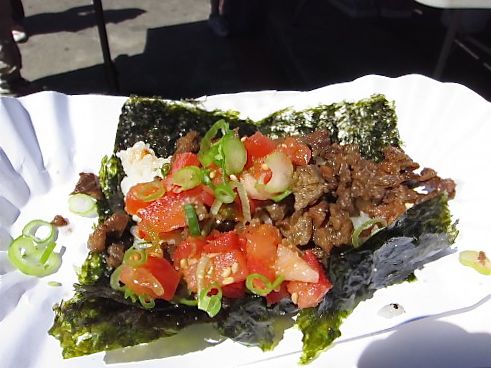 Market and Mission, two of San Francisco’s most famous streets, lead to the same jewel at the head of the Embarcadero – the Ferry Building. This beautiful structure, built over a hundred years ago, looks out onto a breathtaking expanse of bright blue sparkling water.  Ferry service continues to run North through the San Francisco Bay to Tiburon, Sausalito, Angel Island and Vallejo, as well as East, to Oakland and Alameda. Fortunately, public transport is not all this magical building has to offer. It is also an epicenter of gourmet food.

Purveyors of everything ranging from organic coffee to farm fresh fungi line the aisles of its spacious interior, attracting a good mix of faithful locals and inspired tourists. Tiny store fronts serving decadent gelato and delectable chocolate peek out from between larger shops selling cookware and recipe books. The Ferry Building’s flagship restaurant, the Slanted Door (one of my all-time favourites), caters to a higher-end crowd seeking haute Vietnamese cuisine and luscious cocktails. Taylor’s Automatic Refresher, the other gem of the building, is a San Francisco institution, serving up gourmet burgers, must-try sweet potato fries and an assortment of old-school milkshakes and lemonades.

As if this weren’t enough, every Saturday, Tuesday and Thursday, the Ferry Building outdoes itself by playing host to an outstanding Farmer’s Market. Stalls of fresh fruit, local vegetables, aromatic herbs and pretty flowers line the front of the building, while tents selling hot snacks and brunch specials squeeze together in the back. We tried sturgeon with capers, onions and cream cheese on a freshly baked baguette, followed by “korean tacos” comprising deliciously spiced minced kobe and sticky rice wrapped in seaweed paper and lastly, a cheese-free but melt-in-the-mouth delicious pumpkin lasagna. We also picked up a few items from the vast range of regional artisan specialties including cheese, jams, sauces as well as olive oils, specialty salts and cured meats.

A huge fan of local produce and Farmer’s Markets, I only wish New York or Boston would follow suit. After being spoiled by two wonderful years of Borough and Old Spitalfields Market, I’ve struggled to find similar wonders in US cities. Ithaca Farmer’s Market, held every weekend in upstate NY, is surprisingly good and extremely popular amongst tourists and Cornell students alike. Are you listening Boston?