When we first moved to Australia, we were shocked by the prices. Coming from NYC, where you can pay $3,000 / month for a shoebox studio, you’d think that moving elsewhere would be like getting a big bonus every year. Not true.  Sydney has a reputation for its prices: skyhigh rents, inflated public transport, exhorbitant food and drink and even a bleed-me-dry coffee culture. The silver lining is that most of the time you do get what you pay for. Sydney’s real estate market offers beautiful, spacious and varied options. The city itself is clean, green and naturally stunning and many neighbourhoods have their own park(s) or, better still, beaches. The fresh produce is phenomenal, the bar for basic food and drink is extremely high and the coffee is famously delicious. In fact, there are even a few things that are cheaper in Sydney.

I digress from my complaint: one thing that you pay way more for in Australia is alcohol. A six pack of beer will cost $15-$20 in Australia, vs. $10 in the US. An average bottle of wine will set you back $20. When I saw Yellowtail, the face of mass-produced Australian critter wine selling for $12.99 at my local bottle-o (vs. a paltry $6.99 in the US!), I knew the Aussie rip-off was real. Australians, of course, love their alcohol so it’s fascinating that beer, wine and spirits are taxed so heavily, representing as they do, the “sin goods”.

What’s more ironic is that Australia is one of the world’s biggest wine producers, ranking 6th after France, Italy, Spain, the US and Argentina.  From South Australia’s Barossa, Coonawarra and Mclaren Vale to New South Wales’ Hunter Valley and Mudgee and finally to Victoria’s Yarra Valley and Western Australia’s Margaret River — Australia has some of world’s most revered wine regions and Australians have the wine smarts (palettes?) to boot.  So what about these prices? 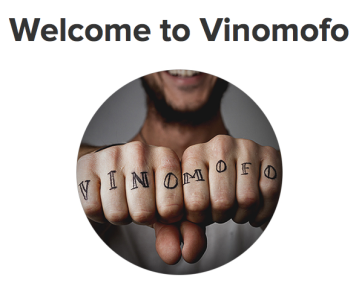 My favourite product this month is Vinomofo: an Melbourne-based startup that lets you indulge your wine obsession without breaking the bank. Vinomofo assembles epic deals on award-winning wines, sells them online with a generous serving of quirk, and ships them directly to your doorstep. Each wine carried by Vinomofo is approved by their rigorous tasting panel and the company claims that less than 2% of wines submitted to them are acccepted.  Not happy with what you got? You have 365 days to return it — “the ‘fo” will even pick up it up and cover the cost of return shipping. No annoying emails, no subscription needed, nothing but sweet, delicious wine.

Everything on Vinomofo is sold by the case; you can choose from a mixed case or go with a single label.  You can also choose from an array of “black market” deals — all you’ll know is the grape, the region and the rating out of 100 (if worth revealing). You might get a witty blurb on why that particular case is awesome and, if it’s a mixed case, you might get a few tasting notes on each of the wines. I bought a black market mixed case recently and have been bowled over by the quality, I’m yet to find a bottle I don’t love and the whole thing cost me no more than $120. You heard me, that’s $10 per bottle.

My introduction to Vinomofo came from a colleague and fellow wine-lover. Four or five of us have succumbed to ordering a case every so often and splitting the spoils. We’ve poo-poohed the wines on offer at company happy hour and have resorted to bringing our own mofo’s to Friday drinks (BYOM trend? You heard it here first). Needless to say, I have a lot of wine on my desk and even more piling up at home.

Of course, after discovering Vinomofo, I tried to think of the US equivalent and had a hard time. The best I could come up with was Lot18, a New York based company with a hard to pronounce name (“lotta tea”?) and, what looks like more of a traditional ecommerce, “always on” sales model. Aside from the dryness of the website (no pun intended), the thing that’s really offputting about Lot18 is the prices: pretty much every wine featured on the landing page was priced at over $60. If I wanted to pay that much, I wouldn’t order it online. I wouldn’t pay their $12.99 for shipping with no returns (forget about a 365 day guarantee!). And I wouldn’t buy just two bottles.

I’ve been spoiled. For good. And it’s great.

Yelp is courting bad press, again. Earlier this month, the company released an update to its iPhone App that will enable users with the highest number of check-ins to become “Duke” or “Duchess” of a venue and reap special benefits. Fair enough Yelp, you’ve gotta keep up with the Jones’ of tech, but at least come up with your own name for a badge. It’ll be interesting to see how Foursquare, which has already dubbed hundreds of thousands of users “Mayor”, will respond to such a blatant rip-off (are they still nursing a grudge from the check-in copycat?).

Don’t get me wrong. I’ve been a Yelp fan and “registered user” for years and I visit the site nearly every day for user ratings, directions, pictures and even to post the occasional review. But the controversy surrounding the company just never seems to end, and it’s starting to feel like the signal to noise ratio of its reviews may be getting weaker and weaker…

The allegations began in early 2009 when dozens of business owners claimed that Yelp was manipulating user reviews (deleting positive reviews and highlighting negative ones) in order to extort advertising revenue from them. The MO of Yelp sales reps, as reported by several newspapers, is to call a business owner with the standard sales pitch, persist in calling even after he/she has turned down the service and then threaten him/her with negative reviews. Is this true? Or are these just bad businesses searching for a scapegoat after an inevitable demise?

Yelp CEO Jeremy Stoppelman vehemently denies the claims (and I want to believe him). He explains that Yelp uses a computer algorithm to rank the user reviews, displaying them in order of “usefulness” rather than chronology (unlike typical user comments). This “usefulness” is determined based on a number of criteria including the ranking / popularity of the reviewer and the frequency with which he/she posts reviews. Sound familiar? Digg ranks its stories and comments with, what many users consider to be, the ultimate black box algorithm but allows users to vote up or bury comments (unlike Yelp).

Stoppelman says the Yelp algo protects against restauranteurs and retailers having their friends and family post glowing reviews and bumping up the venue’s ratings. It does this by strategically burying and highlighting certain reviews. So it isn’t an unbiased system, clearly. It is just unclear whether the bias here is “fair” or extortionary.

As the protests gained traction, a civil action lawsuit was filed against Yelp by 10 business owners alleging unfair business practices. On April 5, Yelp acknowledged the issue. It added links to deleted comments and took away paying members’ ability to place positive evaluations atop their profiles. The outcome is TBD.

But there’s another issue with Yelp’s model that continues to bother me, and that is the user motivation behind writing a review. The typical user will be inclined to post a review in one of two cases: either he had a stellar experience and felt compelled to share his joy with the world or he had the worst experience ever and wanted to tell everyone how much it sucked. This means the majority of reviews are going to fall into an extreme bucket and the average restaurant/retailer will either get a much better, or much worse, rating than it actually deserves.

I’m hoping (guessing) that Yelp’s algo accounts for this somehow (give greater weighting to the frequent and equitable reviewers?) but since moving to San Francisco reviews, I’m losing faith. So many places that me and my friends absolutely adore have mediocre Yelp ratings and so many of the reviewers cite the strangest rationales for their poor ratings (see below) but still receive prime real estate (“above the fold”) on the review page.

Am I grossly out of whack with the San Francisco foodie? Or…could it be that more reviews on Yelp (in SF) = less accuracy?

Its unclear, but Yelp’s move to go social, by partnering with Facebook, may be one solution to the above. By pulling your social graph into the site, Yelp enables you to see exactly where your friends have been going (thanks for checking in), how often they go there (number of check ins) and what they think of it (reviews). Stalking aside, the value to this seems tremendous. People are much more comfortable trusting their friends’ opinions, recommendations and biases vs. those of Yelp’s unknown millions.

Whether socializing the site will be the silver bullet to all of Yelp’s woes remains to be seen, but it still feels like there’s a market gap and a recommendation problem here that needs solving. It just may not be in Yelp’s destiny to solve it.