Cambridge is incredibly pretty in the spring time. Grassy lawns glisten with morning dew, blankets of fallen blossoms litter campus paths and cheery flowers peep their brightly coloured heads out from winter flowerbeds. The spring sun is sparklingly magical, the air is fresh, the light is soft and the whistle of the wind is sweeter than winter would have you remember. It’s a perfect time of year. Perfect also, for food.

With Suzanne visiting these past few days, we had a wonderfully indulgent weekend of fresh lobster, outdoor chili cook-offs and sunday morning dim sum. Lobster is something I lust after, but a disturbing reaction to shellfish prevented me from going near the darn things for a number of years. Now that I’ve eaten my way through my allergies, my obsession for hunks of lobster dressed in lemony mayonnaise and stuffed inside a crispy, buttery roll (particularly the kind served up at Ed’s Lobster Bar) has reached new heights. This Saturday I took the leap and attacked a freshly steamed lobster friend (shells and all) at Erin’s birthday party.

Sunday morning, we joined the resident Asian crew (hailing, of course, from Denmark, England, Australia, Canada and even China) in a gluttonous meal of dim sum. Upon discovering that “Empire Seafood”, the Beach Street institution we’d planned on visiting, had shut down, we decided to walk farther down to Hei La Moon – a busy, bright-looking place with a long, but fast-moving, line and fierce, microphone announcements. Fifteen minutes later, we were sitting at a large table, ogling at carts of giant white pearls, curious parcels and multi-coloured layer cakes. We started with congee – “soupy rice” – served in small bowls with chinese soup spoons and savory flavorings. This was followed by an assortment of steamed dumplings, grilled meats, soya drenched vegetables, rice cakes and puff pastry. 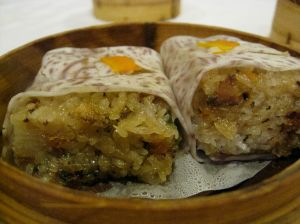 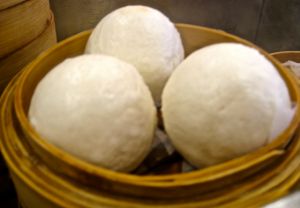 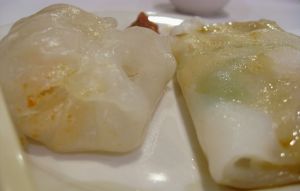 I discovered, to my amazement, that almost everything we ate was in some way, a derivative of rice. The gelatinous layer that enveloped every dumpling, the bread-like cushion around meaty goodness, heck even the desserts – all rice! I didn’t eat too much of any one thing, but my favourites included the char siu (spare ribs), which were succulent and smoky and the sweetcorn cakes, which tasted like sweetcorn/eggdrop soup.

Desserts included Jin Deui (a chewy dough filled with red bean paste, rolled in sesame seeds, and deep fried) which I found a little too sweet, egg custard tarts (which I thought were too eggy and not sweet enough) and some sticky, rice-based buns topped with coconut and flavoured with mango/peanut/pistachio (which I thought were pretty great). The two things I didnt try were the turnip cakes and the chicken feet (not sure I will ever try these!). I do wish though that they’d had soup dumplings and the traditional bready pork buns (bau) would’ve been really nice. Overall though, this place was pretty darn good, and at $13 bucks a head, I have absolutely no complaints.

One thought on “Spring Weekend of Gluttony”