The Saturday before last, I quite literally busted my ass. 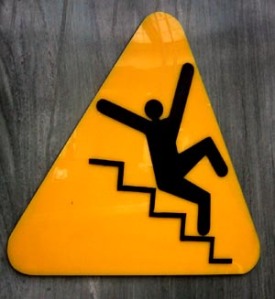 I was heading down to the basement of an art gallery, hot drink in one hand, handbag in the other, when my right foot lost traction with the stone step beneath it.  I flew into the air.  The contents of the lidless cup flew everywhere. Hot chocolate hit the walls, my jeans, my t-shirt, my hair, my face.  A cruel reminder of the splatter technique a group of us had been refining earlier that morning at a painting class.  I landed, with a great thud, on my behind.  The only thing I felt more acutely than my utter mortification was the wave of pain that had engulfed my entire body, making it hard to crack a smile, to move, to stand.

My two friends propped me up and I attempted to don my I’ll-be-fine face, while my husband ran to fetch ice.  We hobbled into a nearby bathroom and I let him clean me up as my bravado broke down and I succumbed to bawling uncontrollably for the ensuing five minutes.  We somehow made it to a taxi, where I positioned myself as best I could in a yogic cat-cow, and up the stairs to our apartment.

We spent the next 6 hours applying ice pack after ice pack to what Google told us was likely a broken tail bone.  I spoke to my dad, a cardiac surgeon who thinks anything outside of heart attack territory is “minor”, and didn’t know whether to feel heartened or alarmed when he told me a broken tailbone is one of THE most painful things ever.  Multiple Advil were barely easing the throbbing but, as the evening progressed, most scary were the vertigo and tinnitus that accompanied and derailed all attempts to stand.  We talked about going to the emergency room but the slightest movement would result in immense pain.  We decided to wait and, fortunately, the next morning I found that I could stand and very slowly move.

The doctor at the urgent care clinic dubbed my condition coccydynia — pain and discomfort in the tailbone area resulting from injury.  X-rays declared it a “likely fracture”, not much different than Google’s verdict but then breaks in the small coccyx bones, we learned, are hard to confirm.  Recovery, whether a bruise or a fracture, ranges from 4-6 weeks to several months and treatment involves prescription pain killers and limited strain to the area, i.e. no sitting.  Hmm.

Armed with a few bottles of prescription Ibuprofen and Tylenol with Codeine (for “breakthrough pain” I was told), we headed home and began my treatment in earnest.  A few hours, a couple of visits from friends and several episodes of Revenge later, I found that I could lie on my side, prop my head up on one hand and type with the other.  It wasn’t great but it was good enough to work from home. Today, I’ve felt well enough to stand and discovered that our living room windowsill is the perfect height for a makeshift standing desk. My heels and feet ache but what I’ve lost in pedal comfort, I’ve gained in typing speed.

So what have I learned in these last few days?  For starters, I don’t think I’d ever said the word “coccyx” out loud until I fell on mine.  The coccyx, or tailbone, is a vestigial structure, the remnant of a lost tail.

It consists of 3-5 small bones that are either separate or fused and together represent the bottom of the vertebrael column (the spine).  There are fibrocartilagious discs between the bones of the coccyx which are similar to the discs present in our spinal column. The main function of the coccyx is to be a weight-bearing structure when a person is seated; it forms a tripod with the two hip bones. The coccyx bears more weight when the seated person is leaning backward and less weight when the person leans forward.

Unsurprisingly, the most common cause of coccyx injuries is falling on your butt. Both the primary care physician I saw Sunday and the orthopaedic specialist I saw yesterday said that slipping on ice or stairs or while snowboarding are the most frequent complaints.  Unlike other fractures, you cannot immobilize someone’s coccyx by putting it in a cast; the only route to recovery is time and rest.

A friend, who fractures her tailbone a few years ago by sitting down hard on a car seat belt (sounds crazy, yes) called to offer some advice last night. She told me she initially underestimated its seriousness but found her pain worsening over the course of six weeks. She ended up cancelling longstanding travel plans to instead spend a month lying on her couch. It was several months before she could exercise again and her pain killer intake ended up causing a stomach ulcer. Yikes.