I have a secret.  It’s been creeping up on me the last few weeks but I’ve only just started to take notice.  The random sore spots my feet wake up to, the restlessness I experience on a sunny weekend morning, the frequency with which my spandex has been visiting the washing machine. I think I’m becoming a runner again.

Last month, we ran City2Surf, the world’s largest run and Sydney’s favourite sporting event (that’s what they tell us). Niraj signed us up in secret. I think he told me on the flight to Paris, which is why our holiday was punctuated by early morning runs along French rivers. I got back from our travels on August 3rd with a week to spare. Between jet lag and short notice, I really didn’t have much time to “train” for those infamous hills. Still, we did just fine. Funnily enough, the race fell on the weekend we were moving into our new apartment. We conveniently fell out of bed in the corporate apt and walked 5 mins to the start line in the CBD and then ran to our new place in Bondi. 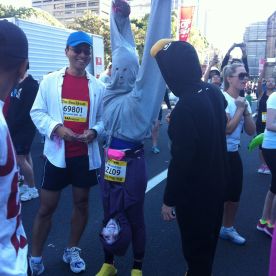 Running (walking) with all their gear

The crowds were unbelievable.  85,000 people had shown up to run City2Surf that morning and another 20,000 or so were out and about as supporters and volunteers! It felt amazing to be part of something so big.  A colleague at work had warned me that the first five minutes would see jumpers and hoodies being discarded en masse — these Sydneysiders don their old woolies to stay warm at the start of the race and then cast them aside for the Red Cross to collect. Sure enough, we left behind piles of old clothes and a ton of collection volunteers.

The first couple of kms of these races can be really frustrating if you’re not prepared for some aggressive zigging and zagging. Because we registered late, we were grouped together with the walkers, which made it even slower. It was a good opportunity to see all the costumes though: there were superheros, muppets, ballet dancers and a lot of sponsored teams.

Niraj and I had committed to sticking together the entire way. As we hit the first of several sets of small hills, my eyes threw exaggeratedly exasperated looks at my husband. He laughed and said we’d hit the big hill — heartbreak hill apparently. He lied.

The uphill climbs kept coming and each time we thought (hoped), it was the last one, it wasn’t. Heartbreak Hill finally came. Wow. The half marathon I ran a few months ago in the New York winter suddenly seemed like a piece of cake. We made it through, panting and pushing. The camaraderie was amazing! Not just amongst the runners but with the supporters. People had actually baked cookies and come out onto the streets to feed us. Little kids stood on the pavements, shrieking “free high fives!”. A group of men, stripped down to their underpants and covered head to toe in blue paint (smurfs) were handing out gatorade; residents had come out onto their front lawns to reward interested runners with blasts of water from their hose pipes. The city’s spirit was incredible. As we came down the last hill, the beach came into view and we knew we were almost done. We picked up the pace for that last kilometer, rushing out along Campbell Parade, buoyed by the anticipation of the finish. We finished in 94 minutes.

City2Surf really was a symbolic (and convenient) run for us. Unlike most of the other 65,000 people who finished, we were lucky enough to skip the brutal bus journey home and walk back instead.

City2Surf wasn’t painless for me. My lack of training definitely made itself known later that day and even the next as my sore limbs and creaky joints began complaining. The longest I’d run in the weeks (months really) before was a pitiable half hour. And no, I hadn’t pushed myself up five massive hills. Since moving to Bondi, however, I’ve fallen back in love with running.

I’d become a fair weather outdoor runner in NYC (can you blame me?!) but the Bondi to Coogee trail and the perfect Sydney weather are impossible to turn down.  Oh and it’s a 3 minute jog from our apartment.  I’ve run it every weekend.  The path snakes along the water and climbs up as suddenly as it drops down. The views are some of the most breathtaking I’ve ever seen. The beautiful Eastern beaches, the sparkling Pacific ocean, the dramatic cliffs and the glorious waves that crash against them. The trail is packed every weekend — Sydney power walkers, activity seeking tourists and of course Bondi locals walking their designer dogs. Last Sunday I ran the 12 km loop and rather than complaining, my muscles rejoiced at the challenge. I think I’m officially a runner again 🙂