We’ve recently returned from 12 days in Japan and what’s been one of the most remarkable trips of my life. As a Nippon first timer, I was, as expected, floored by the meticulousness of the Japanese, by their mind-blowing food and their ubiquitous vending machines that hail from the future and spit out perfectly hot drinks.

What really captivated me however, was how Japan has managed to straddle old and new — seamlessly marrying its rich cultural heritage and regard for custom with its place as a leader in the modern world. Japan has some of the world’s fastest trains, bustles with the world’s largest metropolitan area, has the world’s longest life expectancy and even boasts the world’s most advanced toilets (they’re also very clean) yet, on a quiet afternoon in Kyoto, if you look closely, you can spot a real Geisha hurrying to her next appointment in full costume. You can still find traditional Japanese tea ceremonies and stay in traditional ryokans and you’ll encounter sushi masters who’ve earned their Michelin stars, not by experimenting with the avant garde, but by adhering to Edo tradition and even shunning all modern appliances.

Our traditional ryokan in Kyoto

As decorative as it looks, this was a fully functional sink carved out of solid wood 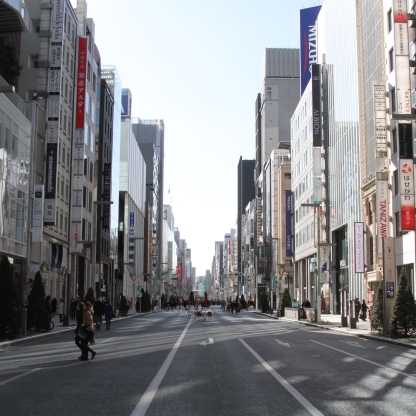 In contrast, Ginza reminds me a lot of Midtown Manhattan

Ginza’s “Metropolitan luxury” as described by the Tokyo metro map

A focal point of our trip, of course, was the food (so far, you can read about Sukiyabashi Jiro, Robataya Roppongi and Gontran Cherrier). Japanese cuisine is as diverse as it is divine, and we had the opportunity to partake in everything from street eats like ramen and yakitori to high-end sushi and kaiseki. A standout meal and longstanding dream was lunch at Sukiyabashi Jiro, which we finished in a record 30 minutes on our last day. As incredible as that was, my favourite meal (probably of all time) was at the hands of the husband-wife duo behind Sushi Sawada: a tiny, 6-person restaurant in yet another nondescript, shiny Ginza highrise. No possible combination of words could do the experience justice (but I’ll try, so stay tuned).

Outside of the food, we spent our time skiing some incredible powder in Niseko, wandering the ancient streets of Kyoto, and stuffing our faces with fresh uni and Hokkaido crabs in Otaru (oh wait.. that’s food again).

Tokyo took me by surprise; I tend to be skeptical of capital cities, especially cities that are urban and sprawling. But Tokyo, with it’s ruthless efficiency, unexpectedly helpful residents, immaculate cleanliness, trendy boutiques (I hate malls) and endless alleys, buildings, basements, markets and department-store mazes of insanely good food, was impossible not to fall in love with.

An unindentified but awesome looking bulb

This seaweed reminds me of an unspun casette tape

The narrow alleys of Tsukiji 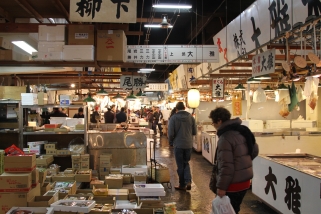 The guts of the market

The snaking line for Sushi Dai 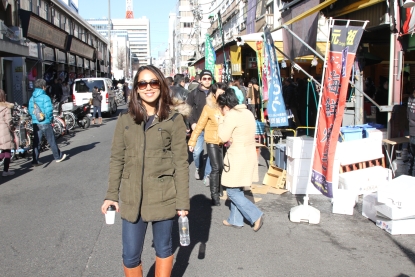 Aside from requisite visits to the gorgeous grounds of the Imperial Palace, the jam-packed Meiji shrine, and mindboggling Tsukiji Market, we accomplished some serious wandering, taking in exhibitions at the MOMAT and exploring the bustling neighbourhoods of Ginza, Shibuya, Shinjuku and Harajuku. Despite several 20,000 step days, I’m sure we barely scratched the surface.

And I suppose that’s yet another thing about Japan that makes it special: it’s a place so full of stuff – of paradoxes and contrasts, of culture and tradition, of modernity and trendiness and of so much elegance and beauty, that it’ll keep you coming back. I, for one, can’t wait.