At the beginning of this year, I attempted to capture our 11 day trip to Japan in a daily travel journal. I think I published maybe three blog posts and ended up with a folder of half complete musings. This time, I’m going to do better because these posts will be short (I’m limiting myself to an hour writing each day), not-every-day (although if they are, that’s OK) and will capture 5 observations from the day that passed.

It’s my first time in Italy in 7 years. How did that happen? Italy is one of those countries, like France, that always feels familiar. The espresso, the pasta, the pastries…Italian culture has permeated the world, and its presence is felt no stronger than in Sydney, where the coffee culture, delicious bakeries and creative Italian cuisine is delightfully authentic.

We landed in Rome in the wee hours. It’s one heck of a flight through Dubai, with more than 20 hours in the air, but the bright sunlight and sheer excitement wiped the sleep from our eyes. After collecting our Europcar rental, a Fiat of course, we headed straight out on our 250km journey to Tuscany.

The plan was to grab a bite and stop at a couple of the towns along the way before heading towards Siena. We’re pretty good at road trips and we’ve recently taken to seizing any opportunity to be in a car to listening to a podcast. Usually, it’s something about tech, occasionally its from the Moth or the New Yorker. Today it was about startups. And so, with Jason Calacanis gushing about the soon-to-be-extinct Zirtual as background music, we made good time to Bagnoregio.

Civita di Bagnoregio is a medieval town about 150km north of Rome. It was founded more than 2500 years ago as an Etruscan settlement and sits atop a mountain that is slowly eroding. It was, in a word, breathtaking.

Like so much in this part of the world, Bagnoregio feels like a perfectly preserved postcard from Roman times. A paved footbridge connects it to “the modern world” and the view from the approach, set against bare ridges, cuts a dramatic scene.

With the sun out in all its mediterranean glory, temperatures had soared to the mid thirties and the 8,000 step round trip was punishing. We stopped on our way back for a refreshing granita and took every opportunity to bask in the shade. 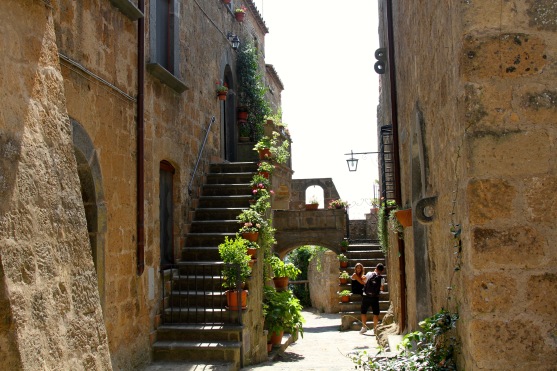 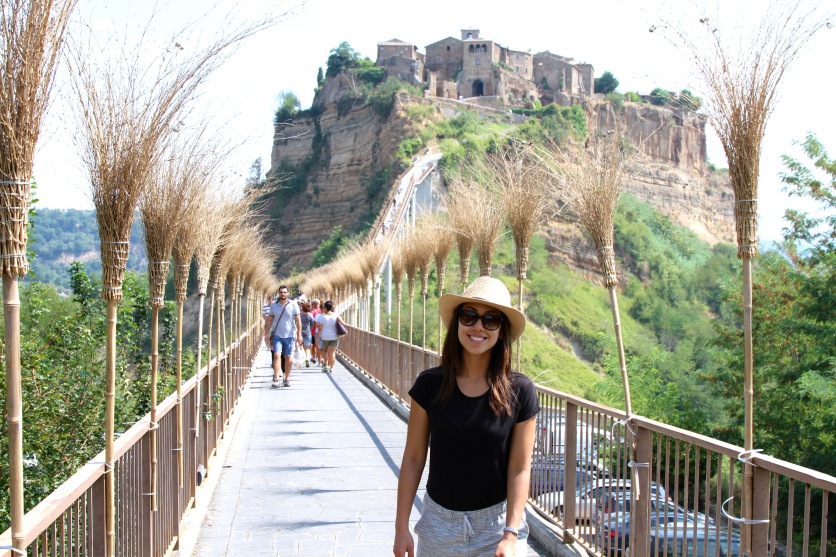 By the time we got to Siena, it was 3pm. We stopped for a quick (late) lunch in town and then drove an additional 20 minutes North to our hotel. Hotel Le Fontanelle sits on a functioning vineyard set against the gorgeous Chianti Hills. Tucked away, tranquil and yet perfectly executed, it’s a beautiful escape and feels unlike anywhere I’ve ever stayed in Italy. By dinner time, temperatures had finally eased and we were able to sit outside and soak in the beauty of the scene…and eat and drink far too much.

A meal with a view

Our meals came with Cloche platters! 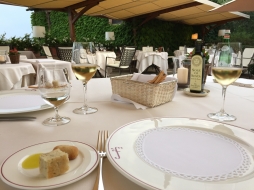 And lots of Italian wine

Here are my five observations from day 1.

2. Speaking of dry sun, did I mention how hot it is? It’s hot as. Coming from the Australian Spring, we’ve been caught by surprise. The Tuscan sun can certainly hold its own.

3. Italian, the language, is just as beautiful as I remember. I studied French for several years and can rattle off some survival Spanish but I can’t claim to speak much Italian. All I know is it’s music to my ears.

4. People drive fast. Like really fast. And unlike Australia and much of Northern Europe and Switzerland, there’s little concern for speed cameras. We were clocking in at 100kph on the highway from Rome to Siena and were constantly being overtaken. Oh the narrow, winding country roads? The Italians are zooming there too.

5. This one’s a little random but I thought it was really interesting: there are a ton of tour buses with tourists from Mainland China. It might just be the airport and the towns we’ve seen so far, but I thought this was a big shift from the last time I was in Italy. We’ll see if it’s true in the smaller towns as well.