I know, I know, I’m late with this month’s favorite, but I’m going to try and stick with my plan of reviewing an innovative new product every month.  Given my current obsession with cooking, it should come as no surprise that this month’s favorite is a food. More specifically, it’s a kind of pasta. A low-carb, low-sodium, high-protein, gluten-free, absolutely delicious vegan pasta!

I whipped this up last week (recipe on the way): fresh prawns, asparagus, cherry tomatoes, Persian Feta and mung bean fettuccine. That’s right, those green noodles are made entirely of organic mung beans and water. No processed carbs, no gluten, no eggs. They’re vegan and even qualify as raw. Most importantly, they are absolutely delicious! They cook perfectly al denté and, unlike many refined flour pasta substitutes, they could easily pass for the real thing. How awesome is that?

It gets even better: Explore Asian, the New Jersey-based company behind this innovative product, makes not just one, but five different kinds of bean pasta. I haven’t had a chance to sample their edamame, soybean or adzuki bean spaghetti but I recently used the black bean version in a stir fry and was thrilled with the results.

To understand why this is a truly groundbreaking line of products, lets take a look at how regular fettuccine stacks up against Explore Asian’s mung bean version. 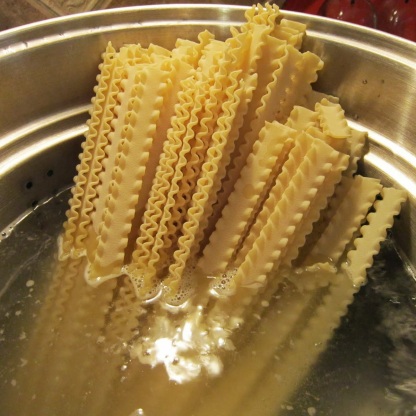 Photo by the Italian Next Door 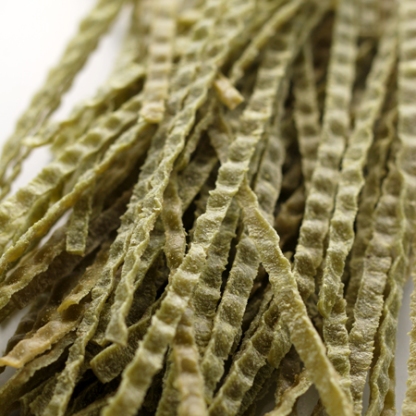 Photo by the Wellness Coach, Sydney

Fettuccine (literally “little ribbon” in Italian) is a flat thick noodle made of egg and flour. It’s popular in Roman cuisine and holds up well with thick, hearty sauces, making it a popular choice for Alfredo and Carbonara.

If you look at any nutritional chart for fettuccine, the “standard” serving size is 2 oz dry noodles or 1 cup cooked. The reality, however, is that most restaurant portions you’ll encounter are far larger.

80% of the calories in regular fettuccine come from carbohydrates vs. 37% in mung bean fettuccine. The bulk of calories in the mung bean version actually come from protein (55%) which, amongst other benefits, requires more energy to metabolize and keeps us feeling full longer.

Now, meeting our protein requirements (between 0.8 – 1gm per kg of weight) isn’t a big deal for those of us who eat meat, but for a vegetarian, vegan or someone committed to a raw diet, it isn’t as easy. As I mentioned earlier, this is a product that qualifies as “raw” because the process by which it’s made involves extruding mung bean dough at temperatures lower than 120F. In fact, the noodles can be eaten simply after soaking in water for 36 hours. No heat needed.

The bean version is also packed with fiber (45% of RDA), and with vitamins A, B, C and E. Made from the mighty mung bean, it is also rich in folate and in vitally important minerals such as calcium, iron, magnesium and potassium. A nutritional powerhouse, mung beans are native to India where they’re popular in fresh salads , as a side vegetable dish and in lentil stews. Mung bean flour can also used to make rotis and pancakes, while in China and East Asia, mung bean paste is often used in desserts. Mung beans have been credited with reducing cholesterol levels and heart disease, supporting liver function and promoting healthy hair, nails and skin.

So, whether you’re gluten sensitive, pre-diabetic or simply trying to eat low-carb and healthy, this is an amazing product to incorporate into your regular meal rotation. It truly is a guilt-free pasta.

Where can I get my hands on this?

If you’re in the US, you should be able to find Explore Asian products at most natural stores and at Whole Foods and even Costco. You can also order directly from their website. The bean spaghettis are priced at an affordable $30 for a 6-pack. Here in Sydney, I was able to get the black bean spaghetti and mung bean fettuccine from Kemenys, a specialty wine and food store in Bondi Beach. I haven’t looked farther afield but reckon you’d be able to get it at most natural food stores here as well.

So, what are you waiting for? Get ahold of some bean pasta and get cracking with those delicious recipes!